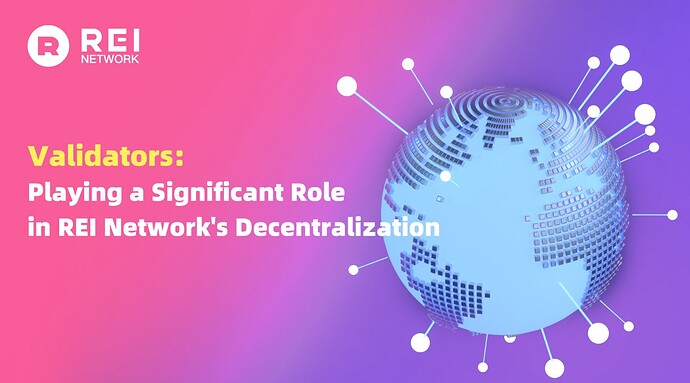 On August 15, 2022, there are more than 21 validators on REI Network, and REI DAO Proposal #3: “REI Network Foundation-supported Staking for Encouraging Validators” was passed with almost 100% community support. It is clear that REI Network will complete the network switch at the end of August. At that time, modules such as Blocking by Super Nodes, Distribution of Node Rewards, and FreeStake will be launched.

The validator is an important part of decentralized development on REI Network. What is the difference between validators on REI Network and that on other blockchains? How to make the network more secure and decentralized? What are the opportunities for the community?

To ensure the decentralization and security of REI Network, in the network state design, it is necessary to ensure that there are at least 21 official nodes in the ecosystem to support network operation, storage, and calculation, and there must be an unlimited number of candidate nodes when official nodes dropped connections and maintain the healthy node competition.

Currently, there are three types of validators participating in the election:

At present, the staked votes are mainly divided into three parts:

Opportunities for the Community

There are two most important roles in the staking development of REI Network: validators and token holders.

There are six steps before producing blocks after the REI Network mainnet switch: Run Validator — Become Verification — Node Election (Top 21 nodes according to the number of votes) — Packs the Transaction — Broadcast the Transaction — Confirmed by Nodes.

The validator with higher votes in the REI Network has a higher blocking frequency, and the nodes that produce more blocks will get more rewards. The foundation will allocate 8 million $REI as node rewards every year.

At present, in order to encourage more nodes to participate in the election, the foundation has also launched an incentive plan. The Top 21 nodes who join the election will be supported by the foundation, 25 million votes will be shared among them according to VotingRate and PeriodRate. The distribution of the remaining votes support from the foundation will be evaluated in multiple dimensions according to the criteria of “promoting the ecosystem of REI Network, industry popularity, and influence, technicality and professionalism”, and will be shared among all nodes in the network, and it will be adjusted monthly according to the performance of nodes.

Therefore, for the nodes participating in the election, the votes that can be obtained will not only be from the community, but also from the promotion of the ecosystem, industry popularity, and technology to gain votes and support from the foundation. In addition, the ratio of the node rewards to the user revenue is set by the node, giving the Super Node more freedom to get more rewards by participating in the node election.

For users who hold $REI for a long time and do not intend to sell it, staking to earn rewards is the best choice to live in the bear market. Earn rewards without any operation, and build REI Network together by staking.

How Do Super Nodes Ensure the Network Security?

Except for Bitcoin and Litecoin, the top 10 public chains in the world by market capitalization are all (or will be transformed into) PoS consensus mechanisms, which means that PoS consensus mechanism is the development trend of blockchain, REI Network chooses PoS consensus mechanism is to comply with the historical development trend of blockchain. However, becoming a node usually requires high equipment and network requirements, and also requires nodes to have knowledge reserve of the blockchain operating mechanism, technical operation, and maintenance capabilities, and a certain number of tokens to become a node. To become an Ethereum node requires 32 ETH (50,000 USD according to the current market price), which makes it difficult for ordinary users to directly participate in the node election, which is not conducive to the security and decentralization of the network.

To join the super node election, the minimum system requirements are only 16G memory, 4-core CPU, 500G SSD storage, 10Mb/s bandwidth, and 100,000 $REI. In addition, REI Network has also reached a strategic partnership with InfStones, the world’s leading infrastructure provider, to provide users who do not meet the technical and equipment requirements to participate in the super node election, so that the network will be more decentralized.

In the face of the risk of malicious and dropped blocks when nodes produce blocks, REI Network will slash it for improper operation or malicious operations of nodes and has sufficient risk control for super nodes to ensure the stable operation of the network.

The risk of “centralization of computing power” usually occurs in the PoS consensus mechanism. The higher the number of node staking, the higher the probability of producing blocks, and the higher the rewards can be obtained, resulting in the Matthew effect, but REI Network Foundation evaluates the development significance of nodes through multi-dimensional directions and gives vote support for it, which is conducive to strengthening the desire of new resources from outside to join and reducing the risk of node solidification. On the one hand, it is conducive to the security of the network. On the other hand, it is also conducive to the further development of REI Network ecosystem and achieves a win-win situation.

On August 31, the total staked votes on REI Network reached 110 million, and REI Network mainnet was switched. Super Nodes will play an important role in REI Network and open up new horizons with REI Network.