3% of the circulating supply (750 million). The purpose of this quorum is to ensure that the only measures that pass have adequate voter participation.

As a new EVM-compatible public chain, REI Network has made continuous progress in self-iteration and performance exploration. After REI Network introduced the “Free Stake” module on July 13, 2022, REI Network will usher in another major upgrade. The new version will make great progress in terms of EVM performance improvement and mechanism innovation. We call this hard fork upgrade - "Better POS" .

From the perspective of performance, “Better POS” will greatly improve the performance of REI Network, and the overall performance will increase by 5 times after this hard fork upgrade, which means that there will be huge room for growth as well as breakthrough evolutions in terms of ecosystem carrying capacity, protocol diversity, and composability between protocols.

From the perspective of mechanism, this hard fork upgrade will mainly address the following issues and propose a mechanism solution:

Since the launch of the REI Network super nodes, the network has been running stably for nearly 90 days. With the active participation of community users and various governance roles, the total number of staked votes has exceeded 150 million. Each validator has made great contributions to the stable operation and security verification of REI Network. However, in the process of long-term operation, some problems also appeared. During node operation, due to the uneven hardware facilities and operational capabilities of validators, some validators may miss blocks or even stop producing blocks, which affects the overall performance and network security of the REI Network to a certain extent. In response to this phenomenon, this upgrade plans to introduce a Jail Mechanism, aiming to solve the problems of block loss and other node performance instability of validators.

Due to the Foundation’s incentive strategy for staking, two unreasonable phenomena emerged:

First, without the support of the foundation, some validators may have a significant decrease in voting proportion and rewards, which will further affect the staking rewards of community users, causing a vicious circle and seriously affecting the enthusiasm of online super nodes and potential community nodes. This hinders the further development of on-chain staking on the REI Network to a certain extent.

Secondly, the incentive tasks previously proposed by the foundation have been completed in stages, and the network has not only started smoothly but also allowed the nodes built in the early stage to obtain subsidy benefits, balancing the specific interests of the first entrants and late entrants in the same network. However, according to the current actual situation, REI Network will objectively squeeze out a part of the rewards space of users and nodes, which will affect the expected rewards of participants in the network to a certain extent.

In view of the above problems, we propose two motions to improve the stability of the on-chain nodes and the rewards status of the nodes in the current environment.

Improve the overall rewards of nodes & stakers on REI Network, thereby increasing the enthusiasm of community users to stake and encouraging more active users to participate in the on-chain behavior. Increase the staking rate, and then improve the stability and security of the chain. Prepare for the overall activity and the ecosystem expansion of the chain.

b. Targeted introduction of the Jail Mechanism 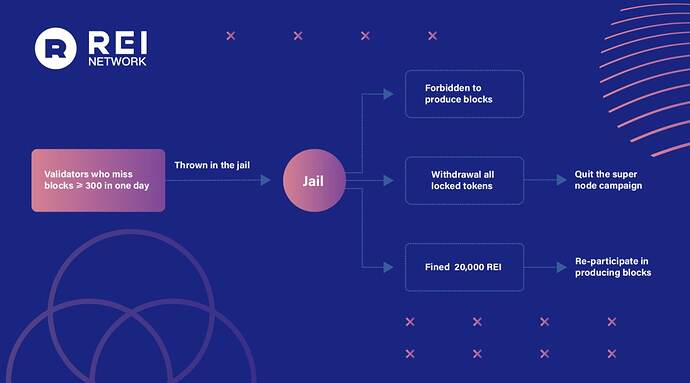 Conditions for being thrown into Jail: Validators who miss blocks ≥ 300 in one day

Penalties in the Jail:

During this period, block production will be prohibited, and validators can choose to pay a fine of 20,000 REI to re-participate in block production. The fined 20,000 REI will be directly locked in the black hole address, and permanently cannot be withdrawn. Validators can also choose to withdraw all tokens and quit the node election, during this period, the tokens and node rewards staked by users and nodes will not be affected, and they can be freely withdrawn or reinvested in other nodes. 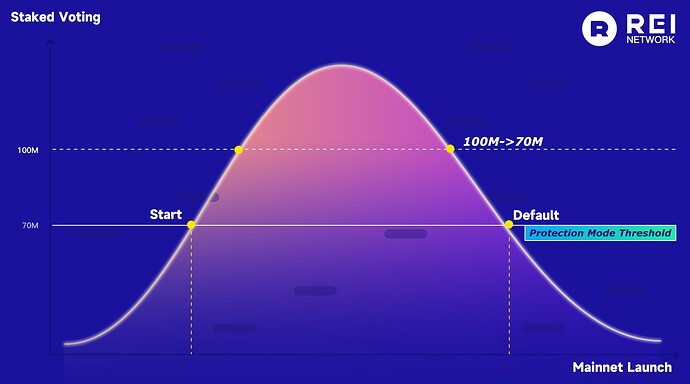 At present, the number of votes in the entire network is about 150 million. According to the rules of dividends, the more the number of staked votes, the less the rewards per capita will be. In addition, the rewards will also be affected due to the impact of the current cyclical changes in the industry. This will seriously affect the participation enthusiasm of online super nodes and potential community nodes.

Therefore, the foundation decided to lower the threshold of the network protection mode to increase the overall rewards for validators. Among the current votes, the foundation-supported votes and the ecosystem partner-supported staking account for more than 40% of the overall network. With the expiration of the foundation-supported votes and ecosystem partnership. Part of the votes from the foundation will be gradually and orderly withdrawn from the validators, then the number of votes in the entire network will still be maintained at about 100 million, and the current nodes can also keep stably operating. Lowering the threshold of the network protection mode to 7%(7000W ) can also further raise the rewards for super nodes and stakers while balancing the security and stability of the chain.