2% of the circulating supply (750 million). The purpose of this quorum is to ensure that the only measures that pass have adequate voter participation.

Background of the Proposal

After Binance completes the $GXC-$REI token swap, all mainstream exchanges will support converting $GXC-$REI. At that time, the consensus of GXChain will be transferred to REI Network, which means that REI Network will also officially undertake the mission of GXChain and start a new journey. The moment we have been waiting for is finally here.

At the same time, we also learned that the REI Network ecosystem has not been fully promoted for the time being when taking the security and stability of REI Network into consideration. Therefore, the promotion of Super Nodes is closely related to the progress of the later ecosystem development of REI Network.

Promote the Community Node Election and Super Node Campaign process, and realize the decentralized operation of REI Network under the premise of ensuring the safety and stability of the REI Network, thereby promoting the prosperity and development of the on-chain ecosystem.

a. Candidate nodes must stake at least 100,000 $REI (formerly 10,000 GXC), and only the top 21 nodes ranked according to the number of votes by $REI have the right to package and produce blocks to get rewards;

b. Have servers and operation&maintenance technicians who can run nodes

a. The REI Network Super Node Campaign has started and will be open for a long time. As long as the candidate nodes that meet the requirements can participate in the packaging and block producing by staking $REI according to the requirements. The super node mechanism start running when the total staked $REI exceeds 100 million. Block producers and staking users can get released token incentives.

b. After the start of the Super Node Campaign, if the top 21 Super Nodes quit, the subsequent nodes will be added in the order of votes.

c. If the node participating in the campaign quit, the $REI staked for voting will have a 7-day “frozen period”, after which the $REI can be withdrawn.

Team REI Network will use the 250 million $REI from the Foundation for the ecosystem fund, of which 50 million are used for node rewards, which will be released in five years, that is, the foundation will release 10 million $REI each year to reward super nodes. 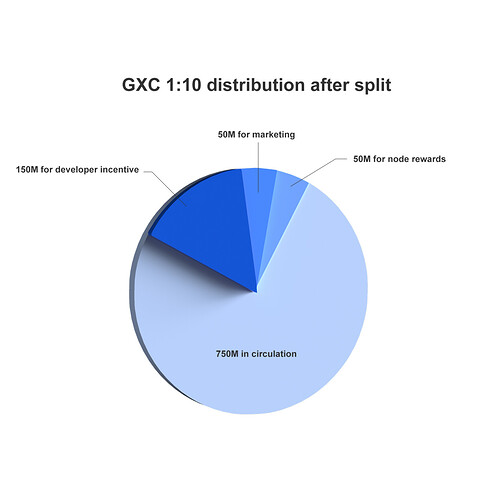 The 10 million $REI released by the Foundation every year (1 million $GXC before the split) will be used for block producer rewards, staking rewards, and Crude consumption. Among them, block rewards and staking rewards will account for 80%. (This ratio is an initial decision, after the REI Network mainnet and the free economic model are running stably, relevant proposals will be initiated and$REI holders will vote to determine the final ratio.)

In order to allow participants to better understand the staking incentive mechanism, assuming that all nodes set the dividend ratio to “0%”, and the cost is calculated according to the entry threshold of 100,000 $REI, then the node rewards is distributed according to the proportion of votes as follows: 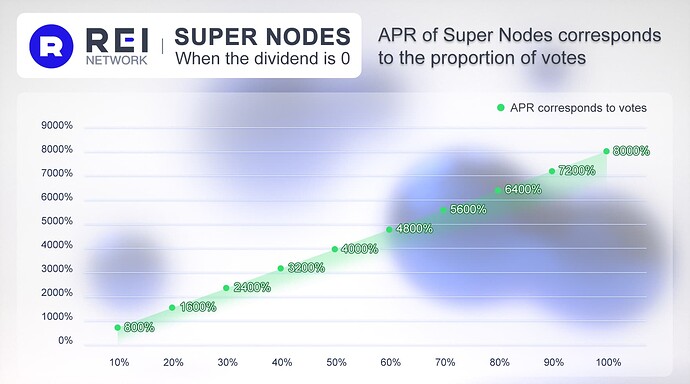 The super node reward includes “trading fee reward” and “blocking reward”. The higher the node’s vote rate, the higher the probability of producing a block, and the more transaction fee reward.

In order to maintain the security and stability of the REI Network, after the total number of votes in the entire network reach 100 million $REI, then the nodes will start produce blocks, so the rate of return is calculated from reaching 100 million $REI votes.

In order to prevent super nodes from doing evil and affecting the network security and normal operation of REI Network, REI Network has set up a punishment mechanism for malicious nodes. Generally speaking, any super node that tries to fork the network and double-sign will be punished. The first penalty will confiscate the $REI staked by the node, the $REI voted for the node, the $REI that is still in the frozen period, and 40% of the total amount of staking rewards that the node has not received (the penalty ratio is tentative), and the confiscated tokens will be burnt immediatly.

If a node is offline for a long time and cannot produce blocks normally, the $REI staked by the node may be locked in a “quiet room”, and the node needs to pay a certain ransom to redeem its staked assets.

Welcome nodes with lofty ideals from communities to participate in the node campaign in strict accordance with the requirements, and jointly build a prosperous ecosystem!