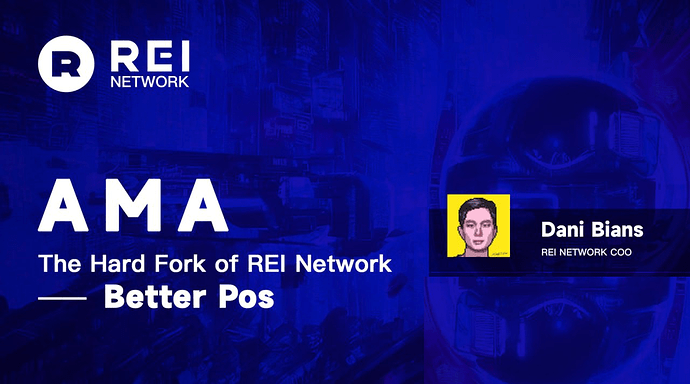 On Dec 1, Dani, the COO of REINetwork, was invited to the AMA in the REI Network international community. Dani shared the details of the latest major upgrade — “Better POS” hard fork, how Jail Mechanism works and how it improves PoS experience, and so on. So many interesting questions from the community about REI Network’s vision. Thank you so much for supporting our AMA. Now let us enjoy the recap!

Q1: Today we are super excited to host an AMA with Dani BIANS!

Let’s warmly welcome our guest today. Please introduce yourself and this hard fork of REI Network

A1: Hey guys!! , I’m Dani BIANS, The COO of REI Network. I haven’t seen you for a while, during the hard fork upgrade period, I would like to chat with you all about the development and future of REI! For me, it’s a pleasure to meet you all here. Hope we will have a great time together in the ama.

It has to be said that the current market is in a relatively difficult period. The FTX event had a great impact on the market some time ago, but we realize that the development of REI Network cannot be stopped, so during this period we not only The active expansion of partners but also ushered in the most important upgrade, the Better PoS hard fork upgrade!!

I have to say that our team is still working very hard to develop the market and improve the performance of REI, so today’s AMA is bound to be meaningful and important!!

REI Network just passed an important proposal with 47 million votes. This is a major milestone for REI: Snapshot

This hard fork called “Better POS”, “Better POS” is another major upgrade since REI Network introduced the “Free Stake” upgrade on July 13, 2022. “Better POS” will greatly improve the performance of REI, and the overall performance will be improved by 5 times after upgrade. At the same time, it means that there will be huge growth space and breakthrough evolution in ecosystem carrying capacity, diversity of protocols and composability between protocols.

Q2. Thank you so much for your introduction and information, moving on to our next question-

Due to Potential security issues posed by unstable node status which affects the stability of REI Network, a major upgrade was necessitated which introduced the Jail Mechanism. Can you explain how this mechanism works?

A2: If the validators do evil, try to fork the network, or maliciously miss blocks (blocks cannot be produced normally), how should they be punished? The goal of “Jail Mechanism” aims to solve it.

The “Jail Mechanism” is completely run by smart contracts, and it is specifically aimed at “super nodes” who do evil or do nothing maliciously. Any super node that tries to fork the network and double-sign will be punished.

When the node is offline for a long time, cannot produce blocks normally (more than 300 blocks within a day), or the system detects that the node has a tendency to maliciously double-sign and want to fork the REI Network, smart contract will automatically be triggered to prohibit the node from producing blocks.

During the prohibition period, the tokens and rewards staked by users and nodes can be freely withdrawn, and super nodes can choose to pay a fine of 20,000 REI to participate in block production again. The fined 20,000 REI will be directly locked in the black hole address, and permanently cannot be withdrawn. Validators can also choose to withdraw all tokens and quit the node election, during this period, the tokens and node rewards staked by users and nodes will not be affected, and they can be freely withdrawn or reinvested in other nodes. The fined token will be directly burnt, which promotes the “deflation” of $REI.

Q3. Wow! Thank you so much for that answer! I’m sure that many members of our community will enjoy the Jail Mechanism after its launch. After lowering the Network Protection Mode Threshold, will the REI Network Foundation give certain incentives to active super nodes in the later stage, and how will the specific form be?

A3: The previous incentive plan for super nodes has been completed in stages, the smooth start of the network has been realized, and the super nodes who participated in the election in the early stage have obtained a certain amount of rewards subsidies. However, in the current situation, the subsidy of the REI Network Foundation objectively squeezes out a part of the rewards space of users and nodes, which will affect the expected rewards of participants in the network to a certain extent…

To a certain extent, this can improve the rewards expectations of network staking participants. For super nodes that are active, positive, and can make certain contributions to the network development, such as establishing a community, expanding the influence of the public chain, they can apply for Grants from the Foundation to get support. We welcome builders from the community to join us in making $REI more valuable.

Q4. I agree that it is a good idea — especially being in the industry we are in! Ok, can you introduce the current distribution of the super nodes, and how to further ensure the security of the network after lowering the network protection threshold? Does the REI Network Foundation have any new incentive methods to attract new Super Nodes?

A4: At present, super nodes on REI Network are worldwide, including nodes from partners, exchanges and node service providers, while the nodes from the community are of great importance. The current block height is 8979034, which runs stably and without fault, all of which are supported by the community. 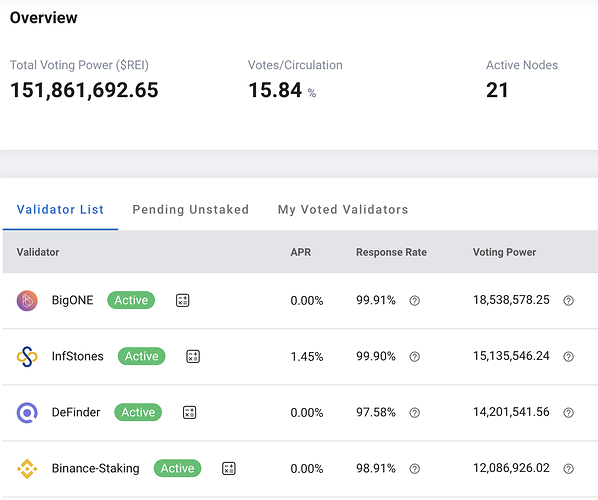 REI Network Foundation will further promote the development of super nodes from the community with three main components. First, further educate the community to understand the importance of super node operation to the whole Network and participate in it; Second, build a better node service platform to make it more convenient for users to set up nodes; Third, REI Network has hundreds of ecosystem partners at present, and will strengthen cooperation with them in the future as well as attracting them to the node election.

A5. The current settings of the black room mechanism are as follows: If the super node miss blocks ≥ 300 in one day, it will be thrown into Jail. During this period, block production will be prohibited, and validators can choose to pay a fine of 20,000 REI to re-participate in block production. The fine of 20,000 REI will be directly locked in the black hole address, and permanently cannot be withdrawn. Validators can also choose to withdraw all tokens and quit the node election, during this period, the tokens and node rewards staked by users and nodes will not be affected, and they can be freely withdrawn or reinvested in other nodes. 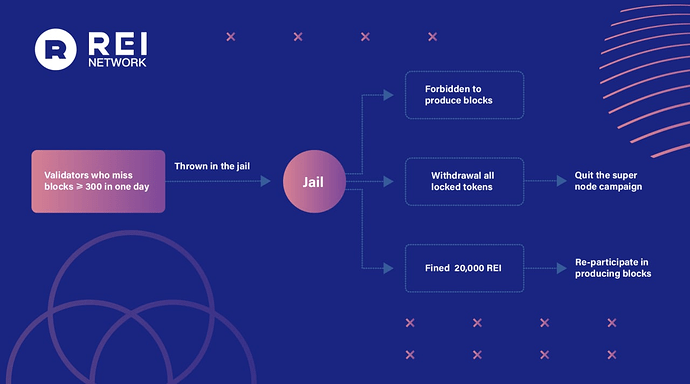 Requirements for being thrown into the Jail Mechanism — Validators who miss blocks ≥ 300 in one day. Requirements for unlocking the validator — you can choose to pay a penalty of 20000 REI to re-participate in block production. The usage of the penalty — 20000 REI will directly lock the black hole address, and permanently cannot be withdrawn. REI DAO will vote on the above details in the later stages. REI Network is a public chain led by the community, and relevant decisions will be decided by the community, which is beyond doubt.

Q6. As I understand, the first phase of REI Network staking ushered in a major upgrade for a better POS experience. Can you tell us the next phases of POS and if it would necessitate some major upgrade later in the future?

A6. There are three core keywords: Performance improvement, Better mechanism, and more completed

After the Better PoS upgrade is completed, the EVM performance of REI will be improved by about 5 times. It is not intuitive enough just by simple numbers. This will mean that the density and quality of the ecology that REI can carry will be qualitatively improved, which will provide good support for the diversity of protocol types and meet the performance requirements for a longer period of time in the future.

The first is to adjust the threshold for default node startup, which means that the overall highest rate of return of the network will increase by about 30% on the original basis, which will be very helpful to the enthusiasm and stability of the network’s pledge

This hard fork upgrade introduces the snapshot function to facilitate the rapid deployment of nodes, and also introduces the jail function to better ensure the stability and security of the network. From this perspective, REI is becoming more mature and more Pragmatic PoS and EVM network

To sum up, after this hard fork upgrade, REI Network will have a great improvement in both the mechanism and the technical performance upgrade. It also means that the foundation of ecological construction and expansion of diversity has become more solid and strong. At the same time, we pay attention to REI’s official Twitter. Recently, we have expanded a lot of partners, all of which are REI’s recent efforts in the cold market. Evidence of evolution, REI Network will continue to expand its influence and ecosystem!

Questions from the community:

Q1: Will we be able to shop with REI in the metaverse area in the near future or in future? Like buying land.

A1: Yep!! Metaverse is a very vast space. REI network is already actively investing in and cooperating with some high-quality projects, such as Cryptovoxel, Xprotocol, etc., so there will be new breakthroughs on this issue soon, so stay tuned!

Q2: As I understand, the first phase of staking of REI Network ushered in a major upgrade for a better POS experience. Can you tell us the other phases of staking and if it would necessitate some major upgrade later in the future?

A2: The rate of return for staking depends on the status of the node and the Commission rate, we need to find a more suitable node to vote for it. Of course, we will also cooperate with more financial institutions to develop staking services, such as Binance, etc.

Q3. When will the hardfork be completed and what surprises await investors and the community? Will there be any events in the near future, like airdrops, and can I ask for your social media accounts? What is your Discord address and Reddit address? What is a fine of 20,000 REI?

A3. The new system version 2.0.0 has been released, and the currently running nodes are being gradually upgraded, and some nodes have already completed the upgrade. There are also exchanges that need to go through this step. The official upgrade is expected to be completed in a month. The penalty for Jail is only applicable to node operators, not individuals, thank you!

Q4. Recently, BTC has had a huge dump and it makes people feel confused with the future of crypto. Does your project be affected by this dump? What make people believe in the long-term of REI Network?

A4. Any change in market value is regular. The dump of BTC and other currencies is an inevitable step in the overall market switch. Relatively speaking, the core value of REI has not changed, that is, to become a more usable EVM. It will not change at all, and the market demand will always exist, especially when the market picks up, we will see a more active evolution

Q5. Since REI Network is a network, it will need various applications to switch between chains. Because this will allow us to use our crypto assets on different chains. In this regard, do you have an agreement with any chain-switching platform?

A5. Yes, we have a sufficiently reliable bridge and both cbridge and multichain have a co-mint cooperation form, which can ensure the efficiency and reliability of value flow. This is also a very important infrastructure!! In the future, more protocols will be combined with REI Network